Including People with Disabilities in Business

We Include is creating a world where people with disabilities are seen, welcomed and valued.

In 2018, The New York Times reported on a study showing companies that championed people with disabilities actually outperformed others, saying, “Revenues were 28% higher, net income 200% higher and profit margins 30% higher. Companies that improved internal practices for disability inclusion were also four times more likely to see higher total shareholder returns.”
.
One of these companies was Microsoft, which launched a talent recruitment and training program specifically for people on the autism spectrum because, “A brain with autism is highly gifted at coding, problem-solving and focus,” according to an article on Inc.com. Microsoft also adapted its hiring process for people with autism, thereby “tapping a largely untouched gold mine of talent.”

Compared to their neurotypical counterparts, employees with disabilities exhibit more:

Chase, JP Morgan, CVS Health and other major corporations have followed suit, rapidly embracing the business-savvy practice of hiring people with disabilities.
.
As the Institute for Corporate Productivity reports, “Hiring individuals with intellectual and developmental disabilities adds highly motivated people to the workforce (which can lead to increased productivity) and it promotes an inclusive culture that appeals to the talent pool organizations want to attract. The improved customer satisfaction can lead to better sales and customer retention. The enhanced employer brand can translate to a better image in the community.”
.
In short, hiring people with disabilities is great for business. If you’re not doing it, you’re missing out on opportunities to improve image, morale and the bottom line. This guide shows how to get started and what to do.

HR can easily tap into this “gold mine of talent” through existing networks dedicated to matching companies with great candidates who have disabilities. Although adapting hiring practices, job description language and office protocols may take an initial adjustment, the dividends will pay with a workforce of loyal employees grateful for the opportunity and happy with their roles in your business.

Click here to find your state agency that can connect you with candidates seeking employment.

The U.S. Department of Labor offers several fact sheets and other resources to educate employers. Click here to learn more about effective recruitment and hiring strategies.

Review your job postings to make sure they don’t include arbitrary, exclusionary requirements that could deter candidates with disabilities from applying.

For example, many office job listings state “Must be able to lift up to 20 pounds,” when in reality, the heaviest object most office employees lift is a five-pound ream of paper.

Use your job description as an effective tool to communicate your company’s commitment to hiring people with disabilities through an Equal Employment Opportunities statement, a diversity and inclusion statement, or both. Check out examples from Ongig and inspiration from top companies.

Provide alternative ways for a job candidate with a disability to prove why he or she would make a good employee.

For example, use a working interview in lieu of a talking-only interview or allow candidates to write down their answers.

Interviewers should be confident asking job candidates what they need to be successful, both in the interview and in the job.

People with disabilities may require a longer onboarding or training time to accommodate their unique brain function or physical capabilities. When employers make this investment in a larger learning curve for new hires with disabilities, they earn a dedicated employee who will be less likely to call in sick, leave the company, be late, or have a poor attitude. The return far exceeds the investment.

Nearly 60% of accommodations cost nothing, while the rest average around $500 per person with a disability. 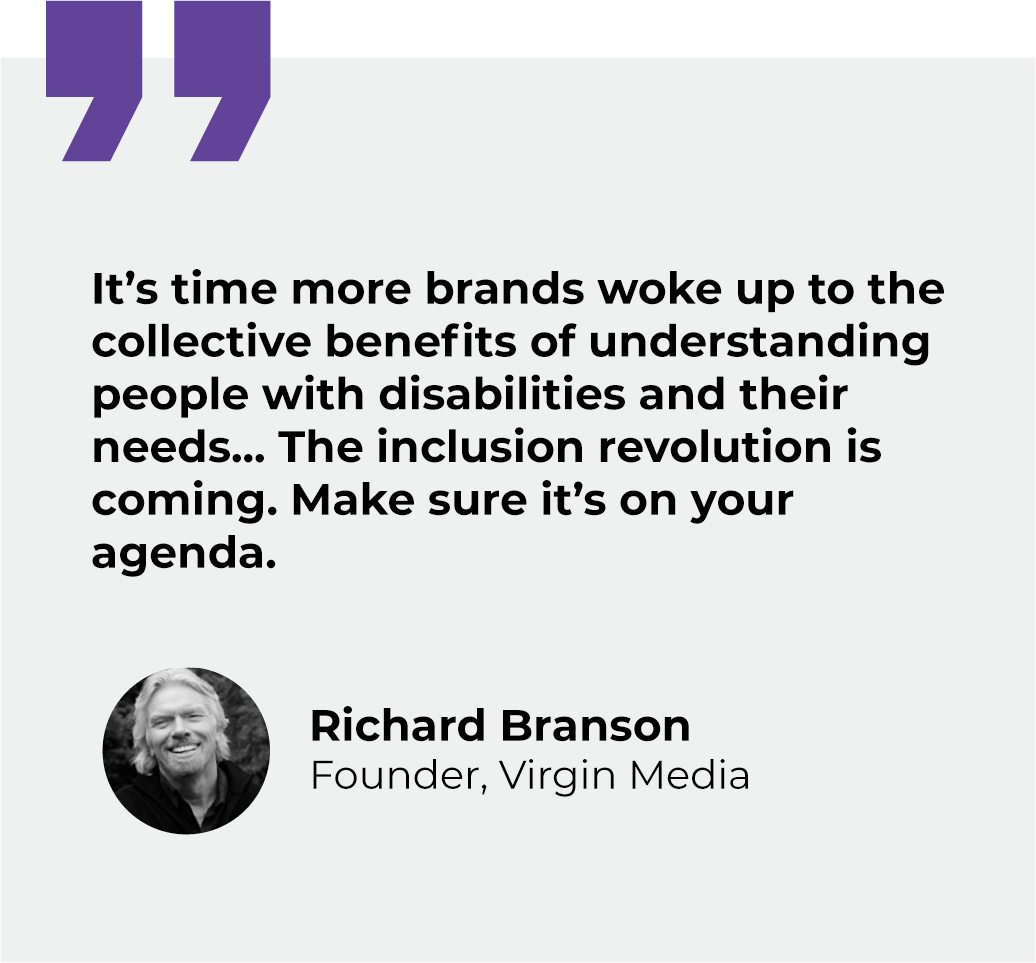 This much market influence, coupled with the growing social trends of acceptance and inclusion as commonplace business practices, means that businesses everywhere should be seeing people with disabilities as a viable market and desirable demographic. The key is for companies to go beyond just ADA compliance and cater to these customers as important consumers. It’s good business for a better world.

Creating a Culture of Inclusion

SHOW THE WORLD THE STRIDES YOU ARE MAKING FOR INCLUSION

For more guidance and information on making your business inclusive, email info@weinclude.org or fill out the form below.